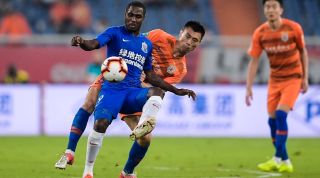 Quique Sanchez Flores believes it will take a month before Odion Ighalo gets into "full rhythm" at Manchester United.

The Red Devils completed the loan signing of the striker from Shanghai Shenhua last week.

Ighalo has moved to Old Trafford until the end of the season, with Ole Gunnar Solskjaer keen to secure cover for the injured Marcus Rashford.

Sanchez Flores coached the Nigeria international at both Watford, where Ighalo scored 15 goals in his debut Premier League campaign in 2014/15, and Shanghai Shenhua.

And the Spaniard, whose second spell at Vicarage Road ended in November, has praised Ighalo's professional attitude on and off the pitch.

"Mainly, the problem is how they train in China. It is not the same as in England," he told The Athletic.

“Is he really ready for first-team matches in the Premier League because the physical difference is so big? He probably needs one month to recover the full rhythm.

“The good thing is he knows his body well, works hard on injury prevention and he is always working after training.

“I should say, also, that I felt in China, he gave exactly the same effort and quality as he gave me four years ago. We had the feeling in China that he could recover a high level with any team in Europe.

“I have an amazing impression of the player. I fell in love with him. As a guy, he’s professional. He’s a straight arrow. As a person, his life is private. He has strong Christian values and he is respectful.

“As a player, it is difficult to explain Ighalo. His first quality is he can protect the ball and he gives time to the team to get up the field and win the second ball. It’s so difficult to get the ball from him. He’s stronger than he looks.

“Four years ago, when we put ball in the space, he was also super fast. Now, with five years difference, he is a bit different… but he will always be fine in a physical battle.

“We played him up front in a two with Troy Deeney and they knew each other inside out but he is absolutely fine to play as a lone frontman, too. One of his most valuable qualities is that his team-mates very quickly learn his strengths and he adapts very well.”

United do not return to Premier League action until February 17, when they face Chelsea at Stamford Bridge.