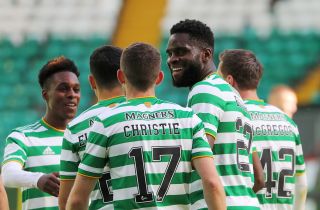 Odsonne Edouard grabbed a hat-trick as Celtic began the quest for an unprecedented 10th successive Premiership title with a comprehensive 5-1 win over Hamilton.

The ninth flag was unfurled in the absence of supporters due to the coronavirus restrictions and inside an unusually quiet Parkhead goals from the French striker and right-back Jeremie Frimpong had the Hoops 2-0 up by the half-hour mark.

Accies midfielder Scott Martin reduced the deficit with a deflected strike but Edouard notched twice early in the second half – with substitute Patryk Klimala adding a late fifth – to fire out a warning to the rest of the top flight, but most especially their only credible title rivals Rangers, who narrowly beat Aberdeen on Saturday.

The Ibrox club will have to come up with something special to wrest the title back from their Old Firm rivals, particularly if Celtic can hang on to Edouard – who again looked a class apart.

🟢🏳️ An @Oedouard22 hat-trick and goals from @JeremieFrimpong and @KlimalaPatryk get the Bhoys off to a flying start on Flag Day! 🙌#CELHAM#SPFLpic.twitter.com/OasZ8690Gu— Celtic Football Club (@CelticFC) August 2, 2020

After the low-key flag ceremony the players took the knee in support of Black Lives Matter and then Hamilton, who had given the champions a guard of honour, played their part in an open first half.

Accies goalkeeper Ryan Fulton made an early save from Christopher Jullien before fellow Hoops defender Kristoffer Ajer headed the next corner over the bar.

However, the Lanarkshire side showed their mettle.

Back came Celtic. Fulton saved a drive from James Forrest and from Ryan Christie’s corner, Jullien crashed a volley off the far post.

The 19th minute breakthrough came following a sweeping attack initiated by right-back Frimpong with Edouard continuing the move before tapping in a cutback from Greg Taylor.

The Hoops left-back was also heavily involved in Celtic’s second goal, taking a pass from Callum McGregor and fizzing it across goal to be knocked in by Frimpong.

That looked to be that for Accies but they got back in the game minutes later when Celtic failed to properly clear a set-piece and Martin’s drive from the edge of the box struck McGregor and then Jullien before passing the scrambling Bain.

The first half ended with another Accies debutant, Ross Callachan, blocking another terrific Jullien volley from a Christie corner but within three minutes of the restart the home side and Edouard scored again.

The Frenchman ended another sweeping move when he delightfully chipped in from Forrest’s cross from the right and his third in the 52nd minute came when he was on hand to stab the ball in from seven yards after Fulton had parried a Christie strike.

The busy Accies keeper made saves from Forrest, Mohamed Elyounoussi and Jullien while Odoffin cleared McGregor’s goalbound header to safety

However, a fifth goal came near to the end of normal time when Jullien sent Polish striker Klimala racing into the box and he rolled the ball into the far corner for his first competitive Hoops goal.