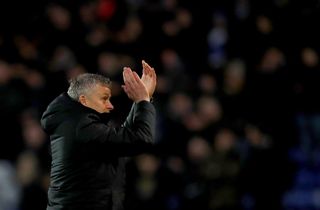 Ole Gunnar Solskjaer is hopeful Manchester United can string some results together to appease fans who once again voiced their frustrations at the club’s hierarchy during the FA Cup rout of Tranmere.

As United ran riot on a boggy surface at Prenton Park, there were a number of instances where the Glazer family, the owners of the club, and executive vice-chairman Ed Woodward were singled out by annoyed supporters.

The sizeable away contingent urged the Glazers to sell the club and Woodward to leave, but Solskjaer believes any dissent can be quelled if United are able to put a winning run together.

Days after responding to similar questions following a defeat to Burnley, Solskjaer said: “We’re just going to keep on working and try to get the results right and keep working to move the club forward.

“Supporters are always happier when you win games and when you’re successful. We’ll just keep on working to get results.”

Solskjaer has been under pressure after Premier League defeats to Liverpool and Burnley in the last week and United’s form coupled with an unhelpful, muddy pitch at Tranmere were ingredients for a cup upset.

However, a much-changed United team showed the vast gulf in quality between themselves and a side lurching near the foot of the League One table, cruising to a 6-0 victory.

Harry Maguire and Diogo Dalot bagged their first United goals while Jesse Lingard struck with barely a quarter of an hour on the clock as the visitors scored three times in six minutes to all but end the tie.

Phil Jones found the net for the first time in nearly six years, Anthony Martial marked his 200th United appearance with a goal before the interval, while Mason Greenwood completed the scoring with a second-half penalty.

“When you score two or three goals early on, it’s a comfortable day. I thought the boys enjoyed it, I enjoyed it, the fans enjoyed it, so a good day,” Solskjaer said.

“This game was one where everyone apart from Man United fans wanted us to lose. It’s been a bit of pressure on them but they’ve enjoyed it.”

Tranmere manager Micky Mellon had nothing but warm words for his players, who had come through a replay that went to extra-time against a callow Watford outfit three days ago.

His focus now is on preserving their status in League One, where they sit 21st and three points adrift of safety, albeit with games in hand on those above them.

Mellon said: “We’re playing against Man United! I can only be proud of my players.

“Of course we’ll say there was things that we would want to do better but we’ve come up against some unbelievable quality.

“So now it will be about what the season has always been about and that’s keeping Tranmere in this division and keep moving it forward from a team that was non-league two years ago.”