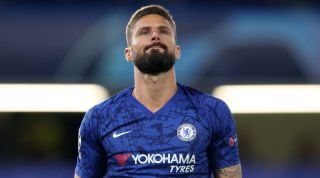 The Chilean, who is on a year-long deal at San Siro, has been ruled out for the rest of the year after undergoing ankle surgery.

Inter spent big on bringing in Romelu Lukaku from Old Trafford over the summer but could dip their toes into the English market once again to strengthen their attack, according to Calciomercato.

Antonio Conte’s side failed in their efforts to sign Roma’s Edin Dzeko and a suitable alternative to Lukaku is now a priority.

Giroud is seen as an intriguing option for the club, given the lack of opportunities he has been afforded by Frank Lampard this season.

The France international, who scored two goals in two games against Iceland and Turkey over the international break, has featured for just 100 minutes in the Premier League this season.

Tammy Abraham’s emergence has limited the 33-year-old’s chances and Inter hope to capitalise on his desire for more regular game time.

Giroud will not want to risk losing a place in the France squad for next summer’s European Championship.

The former Arsenal striker is out of contract with Chelsea next summer, and the Premier League club could therefore be open to a January sale to avoid losing him on a free transfer.

The Serie A side believe that Giroud’s blend of technical and physical qualities would make him an ideal partner for Lukaku.

However, he wouldn’t be guaranteed a starting spot in Milan either after an impressive start to the season by Lautaro Martinez.

The 22-year-old has scored three goals in nine games across all competitions for Conte’s side, the same number Lukaku has notched so far.

Sanchez is yet to get going with his temporary club, as he was sent off after scoring on his first Serie A start against Sampdoria at the end of September before picking up an injury.