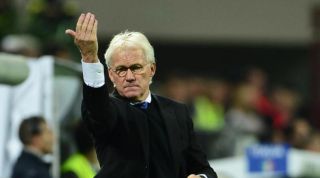 Olsen's men had to work hard for a 2-1 Group I win against Armenia in Copenhagen on Sunday.

Henrikh Mkhitaryan had given Armenia a surprise 50th-minute lead but Pierre Hojbjerg and Thomas Kahlenberg struck to give the hosts all three points.

And Olsen – who hailed the character of his side – knows they can get better.

"I think the opening matches all over Europe are very, very hard games," Olsen said.

"Everybody is starting from scratch and everybody thinks this must be the year they can qualify, so it is very, very tough.

"A couple of our players were not at 100 per cent today, I think.

"But they had a good mentality and if the ball is not running as you want to, it is very important that you show the right mentality."

Hojbjerg echoed Olsen's thoughts and praised his team's response to the Armenia goal.

"It is strange because we had the ball all the time and suddenly one shot and it's in," Hojberg said.

"As things stood, it was a really bad result.

"From there we played well and we showed a good mentality, which is important also to show the other teams in the group that we are a good side."