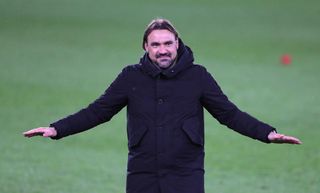 Norwich boss Daniel Farke has called for his players to be “fully switched on” as they look to deliver a “romantic finish” by securing promotion to the Premier League at Carrow Road.

The Canaries need only a point against Blackburn on Saturday night to guarantee top-flight football again next season.

However, after seeing his side draw their previous four matches to delay what had seemed an inevitable coronation for the Championship leaders, the German knows the job is not done just yet.

“I always try and be honest with my players. We know we only need one point but it’s very necessary, because the goals and points could swing in Leeds’ favour,” Farke, who confirmed midfielder Tom Trybull would miss the rest of the season with an ankle injury, said at a press conference reported on the Norwich website.

“We know we have to be fully switched on. It would be a perfect fit to win promotion at home. We will have the whole squad there, 24 lads and some younger lads.

“But my experiences in football say it’s not like a painted picture. We have to work pretty hard to get this romantic finish.”

“When you are too calm and you think everything is done, you get complacent. We are confident, but we know every game is tough.”

Farke accepts Blackburn will relish the opportunity to spoil the party, with Tony Mowbray’s side coming to Norfolk on the back of four straight wins.

“When you are league leaders, everyone is even more motivated because they know they are in the spotlight. We are prepared for a tough game.”

Norwich’s run of draws has allowed Sheffield United to close the gap at the top to three points.

The Blades could go top of the table, at least temporarily, should they beat bottom club Ipswich at Bramall Lane, a result which would also all but make sure of their own promotion.

“We have a difficult game on Saturday – and we all have to play our part,” he said to club media.

“The players have got to produce a big performance and the supporters – if they ever needed to bring their best voices, it’s on Saturday.”

It's nearly time for the next challenge 👊https://t.co/TowGTyYU0Z#AVFCpic.twitter.com/gKVZ6jjgI5— Aston Villa (@AVFCOfficial) April 26, 2019

Marcelo Bielsa’s side head to Aston Villa on Sunday, when the hosts will be out to record an 11th straight win as they continue their play-off push.

Elsewhere, relegated Bolton’s players have threatened to go on strike for the remainder of the season in protest at unpaid salaries ahead of the home game against Brentford.

Millwall will be hoping to put more distance between themselves and the relegation zone when they kick off Saturday’s action at home to Stoke.

Wigan have pulled themselves clear of trouble with successive wins and are away at Birmingham.