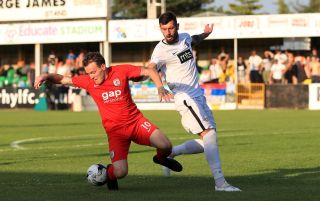 Connah’s Quay face an uphill task to keep their Europa League dream alive after losing 1-0 at home to Partizan Belgrade in a tetchy and controversial second qualifying round first leg.

The Welsh Premier League club, who beat Scottish Premiership side Kilmarnock in the last round, will feel somewhat aggrieved not to have been awarded a penalty when goalkeeper Vladimir Stojkovic appeared to take a swing at Nomad’s captain George Horan as they challenged for a cross.

It was goalless at that stage and Slovakian referee Michal Ocenas opted to book both players but the incident typified a fractious game which also saw Connah’s Quay duo James Insall and Nathan Woolfe yellow-carded, with Zoran Tosic also going into the book.

The visitors quickly became frustrated as they dominated possession but found their hosts resilient in defence.

Celtic manager Neil Lennon was in the crowd to watch Partizan centre-back Starhinja Pavlovic but the youngster was barely tested such was the huge amount of territory their opponents ceded.

In fact the 18-year-old was more prominent at the other end, forcing goalkeeper Lewis Brass into his one save of note in the first half, and confidently bringing the ball out of defence to start attacks.

Brass made another save from Djordje Ivanovic early in the second half but the pressure finally told in the 62nd minute when Aleksandar Scekic volleyed home after Ivanovic’s left-wing cross was only half-cleared.