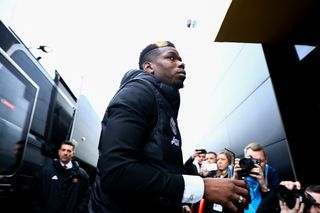 Paul Pogba’s season has never really got going, with a series of ankle injuries limiting him to just eight appearances in all competitions, but he has rarely been out of the headlines.

Ideally, if everything had gone to plan, he wouldn’t still be a Manchester United player. After a fraught three years, during which his on-field contributions have so frequently been overshadowed by speculation and media stories, last summer he publicly declared his desire to leave.

“There is a lot of talking and a lot of thinking as well,” Pogba said back in June. “For me I have been for three years in Manchester and have been doing great; some good moments and some bad moments, like everybody. Like everywhere else.

“After this season and everything that happened this season, with my season being my best season as well, I think for me it could be a good time to have a new challenge somewhere else. I am thinking of this.”

Despite his statement of intent, a deal didn’t materialise before the transfer window closed, yet rumours have persisted about where Pogba’s future may lie.

The French international, who was a major part of his country’s World Cup win in 2018, has again been linked with moves to Juventus and Real Madrid.

According to The Sun, Man United have accepted that Pogba will be leaving the club and have taken £30million off their asking price to help facilitate the 26-year-old’s long-discussed departure.

Former club Juventus are also exploring the possibility of bringing Pogba back to Turin, where he won four consecutive Serie A titles earlier in his career, as well as reaching the Champions League final in 2015.

Meanwhile, the Daily Star have reported that the talented midfielder has been left out of United’s trip to Spain for a warm-weather training camp as Ole Gunnar Solskjaer looks to keep him away from the squad to avoid distraction.