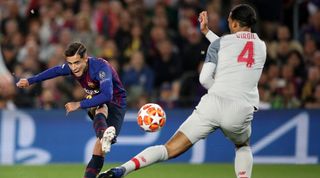 Pogba cast doubt over his future over the weekend by telling reporters that he is considering a “new challenge”.

Real Madrid are interested in bringing in the World Cup-winning midfielder, while Juventus are keen on taking him back to Turin.

El Mundo Deportivo reports on Monday that the United hierarchy have been preparing for the possibility of the France international’s sale for some time.

His departure would raise serious cash and the Old Trafford club have made Rakitic and Coutinho their priorities should they need to replace the 26-year-old.

Rakitic has been the subject of speculation that the Camp Nou club could be willing to sell him this summer, while Coutinho is said to be keen to leave Catalunya after a disappointing 2018/19 season.