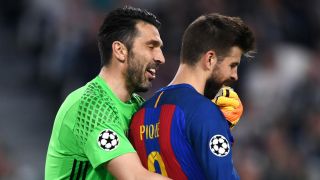 Italy and Juventus great Buffon, 39, will skipper the Scudetto winners against Champions League titleholders Real Madrid in this season's final in Cardiff on June 3, having never claimed the prestigious club competition.

While Pique believes Barca team-mate Messi deserves a sixth Ballon d'Or, the Spaniard wants to see Buffon walk away with the top gong.

"Messi this year will win the Golden Shoe as top scorer and deserves the Ballon d'Or again," Pique told Mediaset in Italy.

"But if you must look at the trophies then Buffon has won the Scudetto, the Coppa Italia and can win the Champions League.

"He deserves it for his career and also for this season and it would be good for another goalkeeper to win it after [Lev] Yashin."

As for predicting the Champions League final at the Millennium Stadium, Pique – whose Barcelona lost to Juventus in the quarter-finals – said: "It'll be a game between two great teams.

"Juventus have been doing well for a number of years now and they have great players like Buffon, who really want to win this trophy for the first time and Dani Alves, our old team-mate and it'd be nice to see him win it."