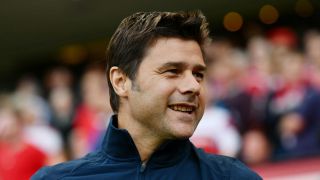 Tottenham boss Mauricio Pochettino has won the Premier League Manager of the Month award for April.

The news will come as little consolation for the Argentine, however, as May began with a damaging 1-0 defeat at West Ham that effectively ended Spurs' title challenge with Chelsea able to clinch the crown with victory at West Brom on Friday.

Pochettino led his side to six successive wins in April - scoring 16 times and conceding just one - as the north London team threatened to push Chelsea all the way.

But the 1-0 setback at the London Stadium means they will likely have to settle for second place and automatic qualification to the Champions League next season.

"For me it's an award, a trophy that deserves to be shared with everyone at the club."A humble Mauricio on his manager of the month award. May 12, 2017

Son Heung-min won the Player of the Month award to make it a Spurs double.

The South Korea forward scored five goals in four consecutive matches in April to become the first man to land the award twice in 2016-17.

"It's my second time this season and I'm thankful to my team-mates, coaching staff and so many fans."Sonny on his April prize. May 12, 2017

Chelsea forward Pedro was handed the Goal of the Month prize for his stunning effort in the 3-0 win at Everton on April 30.

The Spain international picked the ball up on the edge of the area before turning back and hammering a left-footed shot past Maarten Stekelenburg.

. has won the Premier League’s Goal of the Month award for the second time this season with this beauty against Everton!  May 12, 2017