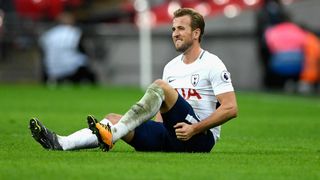 Tottenham striker Harry Kane faces a fitness test to determine whether he will be fit to face Real Madrid in the Champions League.

A hamstring injury kept Kane out of Saturday's trip to Manchester United, with Spurs drawing a blank before Anthony Martial struck late on to snatch a 1-0 win for Jose Mourinho's side.

Mauricio Pochettino selected Son Heung-min in attack rather than Fernando Llorente and Spurs made good progress in wide areas in the first half, where they lacked Llorente's physicality, and then seemingly abandoned the tactic once the Spaniard was brought on in place of Son just after the hour.

Wednesday's Wembley clash could determine whether Spurs or Madrid top the group, but Pochettino is yet to receive word on Kane's condition.

"We'll see in the next few days if he will be fit against Real Madrid," Pochettino told a news conference.

"We need to asses him tomorrow and then take a decision."