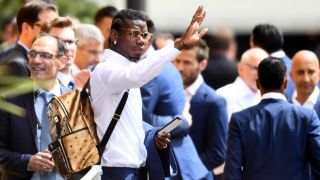 Paul Pogba has described Manchester United as his "first family" in football as speculation over a potential transfer intensifies.

The Juventus star has been heavily linked with a return to Old Trafford in the coming weeks for a potential world-record fee of £100million.

Pogba endured a frustrating three-year spell as a youngster at United, in which he failed to earn a spot in Alex Ferguson's first-team plans before he joined Juve when his contract expired in 2012.

But the France international, also linked with Real Madrid, has done little to quieten rumours of a sensational return.

When asked for his view on United after being shown a home shirt during an interview with ESPN at the ESPY awards, he joked "I don't know them!" before adding "It's my first family."

Pogba, pressed for his response should Jose Mourinho approach him with an offer, replied: "I don't know. We'll see."

Earlier, Pogba described Madrid as "a great club" while saying of Juve: "It's my team, my family. It's where I'm playing. When I wear this [shirt], I'm happy, I'm happy to play football. It's something I've wanted to do since I was little. I'm happy here."

Pogba reached the final of Euro 2016 with France before suffering the heartbreak of an extra-time defeat to Portugal at Stade de France, thanks to Eder's brilliant goal.

The 23-year-old believes Portugal's triumph means captain Cristiano Ronaldo would be the worthy winner of the Ballon d'Or in January next year, given he also claimed the Champions League with Madrid last season.

"You have [Lionel] Messi, you have Ronaldo. Honestly, I like them both. [Antoine] Griezmann has had an amazing year," he said.

"For me, it's Cristiano Ronaldo [who should win], because he won the Champions League and Euro 2016."