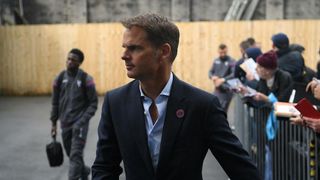 Frank de Boer leaves Crystal Palace without a goal or a point to his name in what is sure to go down as one of the most infamous managerial stints in Premier League history.

The 47-year-old won four Eredivisie titles in charge of Ajax but lasted only four games at Selhurst Park – making his the shortest reign in terms of games for a manager in the Premier League.

He takes this dubious record away from Les Reed, the current Southampton director of football, who was in and out in the space of six weeks and seven matches at Charlton Athletic.

Sammy Lee has served as assistant to De Boer at Palace and might have a word or two of advice, given he comes in next on this list after leading Bolton Wanderers to one win in 11 outings in 2007 – the same amount of games endured by Jacques Santini and Bob Bradley, two former international coaches who floundered at Tottenham and Swansea City respectively.

A spell of pre-season preparation that De Boer will no doubt look back ruefully upon means Reed still holds the record for the shortest tenure in terms of days on 40, while Dutch compatriot Rene Meulensteen was boss for 75 days as Fulham hurtled towards the Championship in 2013-14.

0 - Frank de Boer is the first permanent manager in history to not see his team score a single goal during his reign. Glum. September 11, 2017

De Boer's rapidly falling stock is underlined by his win percentages at the three clubs he has led.

Ajax won 124, drew 45 and lost 18 during his time in the Amsterdam ArenA hotseat, meaning victory was achieved 66.31 per cent of the time in the Eredivisie.

This fell considerably to 36.36 per cent at Inter, where De Boer replaced Roberto Mancini on the eve of last season and lasted just 85 days, winning four, drawing two and losing five of 11 Serie A games.

Calculating his top-flight win percentage at Palace is unfortunately a task of great simplicity, while he is also the first permanent manager never to see his team score in the Premier League.