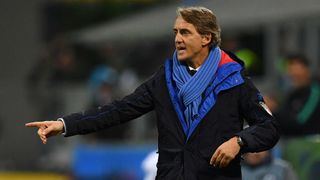 Roberto Mancini credited Italy for taking "a step forward" in Saturday's 0-0 draw with Portugal but rued the team's profligacy.

The Azzurri were dominant for most of the match at San Siro, creating particularly good chances in the first half.

Ciro Immobile was especially culpable, firing over from close range early on and then shooting at Rui Patricio in a one-on-one situation just after the half-hour mark.

The draw allowed Portugal to confirm their progression to the Nations League Finals, yet Mancini could see the positives for an Italy side that played with far more purpose than when their World Cup qualification campaign came to a shock end at the hands of Sweden a year ago.

"What matters most in football is scoring goals. We must improve in terms of taking our chances," Mancini told reporters.

The dominated for long spells, but in the end 's men had to settle for a draw in their final match.It was a special night for captain , who picked up his 100th Italy cap. 0-0  November 17, 2018

"We dominated Portugal and then the decline in the second half was due to us getting tired physically. That was only to be expected, as we cannot play in their half for the full 90 minutes.

"But it is a step forward compared to the Poland game [a 1-0 win last time out in the Nations League], as Portugal are superior to Poland and we controlled the game throughout.

"We tried to play for a result and also give valuable experience to the younger players."

Giorgio Chiellini, who made his 100th Italy appearance, echoed the sentiments of his coach, though he is convinced their problems in front of goal will solve themselves in due course.

"We have the foundations," he added. "We dominated the European champions, and the issue of not scoring goals will improve in time.

"We are still getting to know each other. There is another friendly [against United States in Genk] on Tuesday, and from March the three points start to really count [in Euro 2020 qualifying], although I think we did the Nations League justice and played for the result."