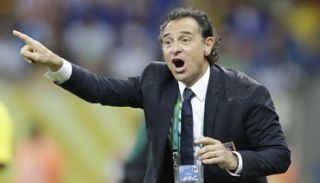 Prandelli watched his side overcome Japan 4-3 in the best game of the competition so far but complained that his players were exhausted and needed more recovery time between matches.

"This is an interesting tournament but perhaps there should be more rest days," Prandelli said. "This is a very hot country and the players need more time to get their strength back."

Prandelli said he could not even look ahead to Italy's next match, against hosts Brazil on Saturday, until he gauges the fitness of his squad.

Both teams have already qualified from Group A but the winner could have the advantage of not facing world champions Spain in the semi-final.

"We are focused on how many [players] we can recover," he said. "The Brazil game is an important game, we can't underestimate it. So my problem is to get some of the physical fitness back. We have to play the next game with the same kind of determination and physical fitness.

"We need to reflect and think, because as usual, if you are good at imposing the right pace and pressuring opponents than you can think of using your strength throughout the game. But when you can't pressure your opponent your lack of fitness is telling."

While Italy had just three days to recover before Wednesday's match, Japan had four and were by far the more spritely side.

The Asian champions were unlucky to lose to a team whose experience and clinical eye in front of goal were the difference between the sides.

Japan manager Alberto Zaccheroni said his aim between now and the World Cup would be to instill more guile in his young side.

"As usual we let in one goal from a free kick and another was an own goal," Zaccheroni griped. "These details are a constant aspect of our matches and so we have to try and remedy these problems before next year's World Cup.

"When you face teams like Brazil, Italy or Mexico, when you make a mistake they score. These teams can teach you a lot and we must learn this lesson."