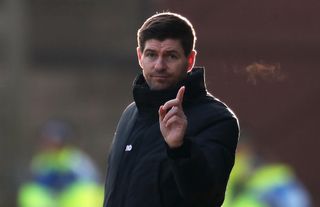 Rangers insist Steven Gerrard is fully committed to his Ibrox post after reports claimed Derby had made moves to lure him south.

On Tuesday, the Times claimed the Ibrox boss had rejected an approach from Rams chiefs to speak to them about their manager’s job.

Frank Lampard is still the man in charge at Pride Park but could be on his way back to Chelsea to take over from Maurizio Sarri.

The Times report claimed that Gerrard was contacted by Derby as the Sky Bet Championship outfit make contingency plans for Lampard’s possible return to Stamford Bridge.

But now Rangers have angrily hit back at the claims, insisting Gerrard is going nowhere.

A spokesman told Press Association Sport: “Let’s get one or two things clear. Our manager has not been approached and he remains one hundred percent committed to the job he has here.”

Gerrard signed a four-year deal when he made his move to Glasgow last summer and led Gers to the Europa League group stages and a second place finish in his first season in charge.

He is already gearing up for the new campaign having signed Jordan Jones, Jake Hastie, and Greg Stewart, with deals for Liverpool’s Sheyi Ojo and Charlton midfielder Joe Aribo nearing completion.

Ryan Kent could also return on loan while moves for Oldham defender George Edmundson are still in the offing.

Gerrard will step up preparations for his team’s opening Europa League qualifier against either Kosovans FC Prishtina or St Joseph’s of Gibraltar when they fly out to Portugal this weekend.

Derby are due to visit Ibrox for a pre-season friendly on July 28.