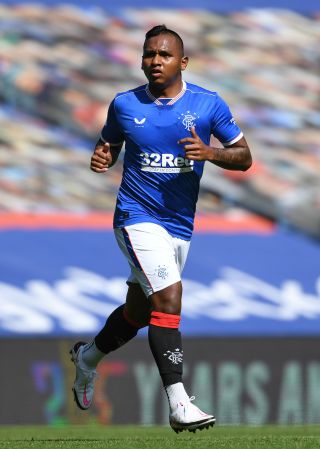 Andy Halliday admits he feels he has been watching a different Alfredo Morelos this season and expects his former Rangers team-mates will want a quick resolution to his future.

Halliday was “shocked” to hear Morelos had been dropped for Saturday’s 2-0 win over Kilmarnock because of his attitude in training.

The Colombian striker appears to have his heart set on a move with suitors Lille having so far failed to meet Rangers’ valuation.

And Halliday feels the Rangers players and club in general will want the situation sorted quickly now.

The former Ibrox midfielder, who left the club in the summer, told BBC Radio Scotland’s Sportsound: “Listen, he’s no stranger to speculation and rumours but it does have a different feeling to it right now.

“The fact the manager has completely dropped him out the squad, it does have that feeling that his Rangers days are numbered.”

When asked what Morelos was like as a team-mate, Halliday said: “He’s a character. He’s full of carry-on but that’s his nature.

“The fact the manager has said that, I don’t know what his attitude has been in training the past week. Maybe he is trying to play his cards to force his way out of Rangers? I’m not too sure.

“But the most important thing for Rangers is that they get this resolved as soon as possible because you don’t want an unhappy player causing unrest in the dressing room.

“He was someone who would brighten up your day and when it came to training he was nothing but 100 per cent effort.

“He was extremely popular within the group but there’s a different feel to it now and if they feel they are not getting the best out of Alfredo, then I’m sure they will be happy with whatever is best for Rangers.”

Morelos was prolific for Rangers for two and a half seasons but has now scored only three times in 17 games, a run which started with him being sent off against Celtic, the seventh red card of his time in Scotland.

Halliday said: “You want him to have that fire in his belly but the amount you are also trying to curb his discipline and trying to calm down that temper, sometimes it comes across that he’s maybe not trying as hard.

“But I feel as if I’m watching a different Alfredo in the games I have watched this year.

“The St Mirren game, he obviously got a couple of goals but I don’t feel as if we have got the same performance.

“Listen, for the first 18 months under Steven Gerrard he was outstanding and we’re talking about values of £15-20 million, if you take football ability alone I think that’s a bargain.

“But obviously his form dipped towards the end of last season, which to be fair the majority of the team did.

“But for Rangers to demand that figure is going to be difficult off the back of not just his disciplinary record but the fact he’s not playing because of his attitude in training.”