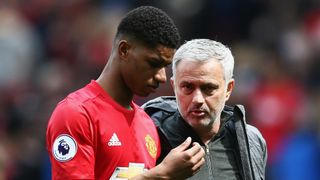 Manchester United youngster Marcus Rashford is loving life under Jose Mourinho and is grateful to have been given the chance to shine this campaign.

Rashford impressed after breaking into the first team under Louis van Gaal last term, but initially struggled to build on his fine form from 2015-16 in the opening stages of this season.

Mourinho never stopped believing in the 19-year-old, though, and even referred to the attacker as one of his most trusted players in a recent interview.

"It is a massive thing when a manager like Mourinho says that I am one of his most trusted players," Rashford told Premier League Productions.

"The best thing about it is that you have earned it. He did not just come in and say 'there you go – play every game'. He has made us all work for his trust and respect.

"It is massive for us and you can see how everyone has come on this year."

Rashford has scored 11 goals in 52 games in all competitions this season.