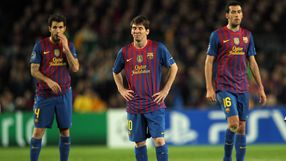 Nine-times European champions Real return to the Bernabeu on Sunday to play Sevilla after falling to bogey side Bayern Munich in a nerve-jangling penalty shootout in Wednesday's semi-final.

Jose Mourinho's men can take some consolation from having a first La Liga title in four years well within their grasp, as they hold a seven-point lead over second-placed Barca with four matches left to play.

Barca's chances of retaining their league title look to have ended after a 2-1 home defeat by Real last weekend.

They then saw their European crown snatched from them after their bogey team Chelsea survived with 10 men to triumph in their Champions League semi-final on Tuesday.

"We have four games left until the end of the season," Mourinho told reporters after the Bayern game.

"We need six points and we need to do it as we have been doing, on our own. Working and fighting as we have done up until now.

"If we win the championship it will have been a very good season and the players will be able to be pleased with the work they have done."

Securing the league title would show progress in the task he was set after being brought in by club president Florentino Perez specifically to end Barca's hegemony at home and abroad.

Inconsistent Sevilla are ninth in the standings, six points off the Champions League qualification spots and a massive 42 points behind the leaders but impressive on their day.

Barca face a tricky task at 15th-placed Rayo on Sunday as they come to terms with one of their worst runs of form in the Guardiola era after three successive games without a win.

With the league title a distant hope, the Catalans will start preparing for the King's Cup final on May 25 against Athletic Bilbao.

"We are Barcelona and we know what that represents, so we will be going out to win all our remaining league games. That's the best way to prepare for the final," Spain midfielder Andres Iniesta told Barca television.

The way the players react to recent disappointment may also influence whether Guardiola finally makes a decision on renewing his contract with the club, which runs out at the end of the season.

"It's a decision between him and the club," Iniesta added. "He knows what we all want and let's hope he stays here for a long time."