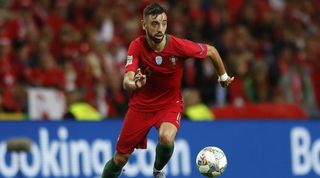 According to Portuguese outlet Record, Real Madrid have entered the race to sign Fernandes and are preparing to lure the player to the Spanish capital.

They are thought to be looking at cheaper alternatives to United's Paul Pogba, for whom a deal seems unlikely.

Reportedly, Madrid will use Jorge Mendes as a middle man in order to help their cause.

Only earlier this week, Spurs were thought to have tabled a bid for Fernandes and hoped to snap him up from under United's noses.

However, it is Madrid that are now the ones swooping in, and it is believed that they are more willing to meet Sporting's €70 million valuation.

Fernandes scored 32 goals from midfield last season, which cemented his place as the highest goalscoring midfielder in a single season.