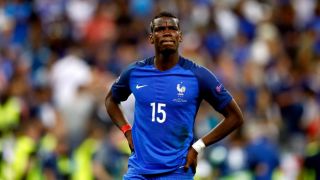 Paul Pogba's impending move to Manchester United is likely to mean Real Madrid cannot afford to sign him, according to the club's former president Ramon Calderon.

The Juventus midfielder, 23, is reportedly on the brink of re-joining United – who he left in 2012 – for a world-record transfer fee.

Real Madrid were believed to be the other candidates for Pogba's signature and Calderon claimed they have either been priced out or rejected by the France international.

"It looks like he will end up at Manchester United," Calderon told Omnisport.

"If we bear in mind how Real's president usually does things and the fact Zinedine Zidane wanted this player in his squad - well, either Real don't have enough money to pay or the player doesn't want to go there and prefers United.

"I have had that experience both ways, with Cristiano Ronaldo wanting in and Robinho out. There comes a time that such players are so demanded [they] can choose where they want to play between the clubs that can pay for them."

Calderon, who was Madrid president from July 2006 until January 2009, thinks successor Florentino Perez has missed out on an exceptional talent.

He added: "Pogba is an extraordinary footballer, outstanding as all the footballing world thinks too. He's a box-to-box player - strong, great dribbling, good passing.

"We will only know if this is a fair price in few years from now. This is supply and demand law, as long as somebody is willing to pay, the selling club will be up for it."

Madrid's only signing ahead of the 2016-17 season has been striker Alvaro Morata, who they bought back from Juventus.