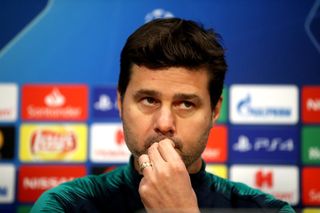 Real Madrid have reacted strongly to a “completely false” comment from Mauricio Pochettino that Tottenham were denied permission to stay at their training ground ahead of the Champions League final.

Spurs are set to use the training complex at Valdebebas in the build-up to the match against Liverpool in the Spanish city, which will host the showpiece European tie at the Wanda Metropolitano.

Tottenham boss Pochettino gave an interview with Spanish radio station Cadena Cope, and during a light-hearted section he was asked if the Spurs squad would also be staying at Real Madrid’s on-site accommodation.

The Argentine coach, who has been previously linked with the manager’s job at the Santiago Bernabeu, replied: “No we will stay in a hotel near there. We have asked, but (Real Madrid president) Florentino (Perez) didn’t want to allow us.”

Laughing, the Spurs boss added: “He would say, ‘the day you coach Madrid is when you can sleep there’. This is the subliminal message, no?”

In whatever tone Pochettino’s comments were meant to be received, Real Madrid have taken a dim view and on Friday issued a strongly-worded statement.

The official communication read: “Real Madrid are surprised by the statement made by the coach of Tottenham Hotspur, Mauricio Pochettino, about a supposed request made to our club for his team to stay in the residence at Real Madrid City on the occasion of the Champions League final.

“Real Madrid wants to make it clear that it is completely false that this request has been made.

“Our club has always shown its absolute availability to meet all the requests made by UEFA, the Royal Spanish Football Federation, Atletico Madrid, Liverpool and Tottenham Hotspur.

“All requests submitted to Real Madrid have referred solely and exclusively to the use of the training pitches at Real Madrid City and the changing rooms. And all of them have been granted by our club.

“Thus, Liverpool plan to train at our facilities on Saturday June 1 in the morning. Tottenham will do so on Thursday May 30 and Friday May 31.

“Real Madrid also wants to emphasise that the accommodation for the finalists of the Champions League is assigned by UEFA following organisation and security criteria. At no time has our club received requests that these teams could be accommodated in the facilities at Real Madrid City.”

While Spurs have been training at their north-London base, Liverpool opted for a camp in Marbella as Jurgen Klopp’s squad fine-tune their preparations.

During the interview with Cadena Cope, Pochettino was also asked about his own future.

The former Espanyol and Southampton boss insisted he remained focused on the job in hand.

He said: “Real Madrid? I have no other goals if I am not training Tottenham. Football takes you where you deserve.”