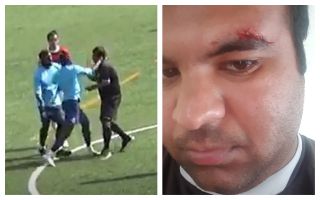 An amateur football referee was left bleeding after being punched in the face by a player who was sent off in a friendly match in London.

Satyam Toki, 28, a father-of-one originally from India, said he was unsure whether to press charges after the attack in Acton, which left him with cuts to his face.

The attacker, who was playing for Sunday league side Sporting Club de Mundial – based in east London – has not been named but is believed to work in a school.

Mr Toki, a train conductor who lives with his wife and one-month-old daughter in west London, told the PA news agency he had asked the player several times to control his language and stop complaining, eventually giving him a 10-minute sin bin.

“He started walking towards the bench and while walking away he threatened me to see me after the match,” Mr Toki said.

“That was the point where I showed him the red card and got punched immediately in the face. I almost lost my vision for a couple of seconds, followed by excessive bleeding.”

In a statement, Sporting Club de Mundial said: “We as a club would like to publicly state that we categorically condemn the horrific actions by one of our players towards the referee.”

It added that the player had been “completely removed” from the club, which was formed last year by popular football publisher Mundial.

The club added that it had offered its assistance to the charity Ref Support UK, which provides training and other forms of help to referees.

The individual involved has been completely removed from the football club and we are committed in supporting the referee, and appropriate authorities with their investigation into the incident.— Sporting Club de MUNDIAL (@scdmundial) August 10, 2020

The incident came as the boss of the Referees’ Association warned a match official would eventually be killed unless more serious punishments were handed out to those who abuse them.

Police and ambulance workers attended after the Acton attack, which saw the match suspended, but Mr Toki said he was unsure whether he wanted to pursue the incident any further.

“It has been reported to the FA and they are dealing with this matter as a matter of urgency,” he said.

“I have had the suspect contacting me apologising for his actions and begging me not to press charges as he will lose his job as a school teacher.

“Though he assaulted me I am still thinking about his career and don’t want anyone to lose his job.

“But on the other side if I don’t press charges in the future he might do the same thing to another referee. Or even (worse) to school kids where he is a teacher.”

Wasim Khan, manager of Mundial’s opponents NW London FC, said he was shocked by the violence, but praised his players for gathering to support the referee afterwards.

“We respect the referees at this level, they take their time out and without them football doesn’t run. It was just shocking,” he said.

“A lot of our players were quite traumatised… we’ve probably got the most nationalities you’ll find at a football club.

“They’ve given up their free time to come and play, so for them to witness that as well is quite shocking to be honest.”

Mr Khan added that Mundial had apologised and paid the match fee after the game was called off.

A spokesman for the Metropolitan Police said: “Police were called at 15:16hrs on Sunday, 9 August, to reports of an assault at a sports club in East Acton Lane, W3.

The FA said in a statement: “We are aware of an incident that took place during a pre-season game on Sunday and we are working with London FA to provide support and ensure it is thoroughly investigated.

“Supporting match officials, at every level of the game, remains a key priority for The FA and for each of the 50 County FAs around the country as part of The FA’s Respect campaign.”