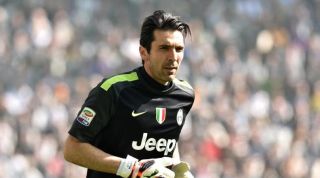 The 36-year-old may be in the twilight of his career but has showed no signs of slowing for a Juve side who have won the last three Serie A titles.

And while Buffon's contract expires next year, his agent, Silvano Martina, said he was very likely to stay at the Serie A giants.

"You have all seen the state Buffon is in," Martina told Calciomercato.

"He will play on for a long time. The contract is due to expire next June, that is true, but the words of [Juventus general director Giuseppe] Marotta seem very clear in this regard.

"There is no rush for the renewal. For this, we have not yet set a date for a meeting.

"Let the transfer market finish and the season begin - then we will see.

"It will really take two minutes to sign a new agreement."

Buffon and his Juve team-mates will be without coach Antonio Conte this year as they aim to make it four Italian titles in a row.

Conte - who has left to take up the post with the Italian national team - has been replaced by Massimiliano Allegri.

Buffon has made more than 700 Juve appearances in all competitions after joining from Parma in June 2001.