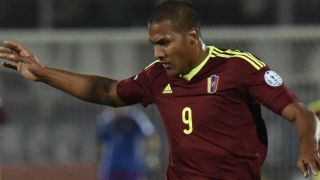 Venezuela skipper Rincon and West Brom striker Rondon have over 115 caps between them and are the two biggest names in Rafael Dudamel's squad.

Oswaldo Vizcarrondo (71 caps), Roberto Rosales (63) and Luis Manuel Seijas (62) are all included, with Dudamel mixing experience with a tinge of youth.

Atletico Venezuela's 18-year-old star Yangel Herrera made the cut while goalkeeper Wuilker Farinez, who is also uncapped, was named in the final squad.

Dudamel, who took over from Noel Sanvicente as coach in April, made his debut on the Venezuela bench in a 1-1 draw with Galicia on Friday.

Venezuela face a tough task in Group C, kicking off their tournament against Jamaica on June 5 before fronting 15-time winners Uruguay on June 9 and then Mexico on June 13.