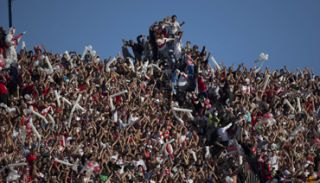 The fan, identified as 29-year-old Guillermo Torres, fell in a gap between the terraces on to a police motorcycle parked on the ground.

Witnesses said Torres lost his balance as he tried to put a banner across a four-metre gap between two sections of the stadium before kick-off in Sunday's match against All Boys.

The stadium announcer at River regularly calls on fans to get down from dangerous positions high up on the terraces during matches.

River won 2-0 and are third in the 'Final' championship standings with 25 points from 13 matches, three behind leaders Newell's Old Boys and two adrift of Lanus.