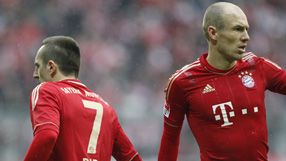 The report said the row was centered on who should have taken a free-kick on the edge of the Real area just before the break.

Bild newspaper also showed a bruise on Robben's cheek and speculated that it could have been caused by a punch thrown by Ribery.

Borussia Dortmund coach Jurgen Klopp has criticised the Bundesliga over the kick-off times for Saturday's games.

Dortmund, who have three games to play and are eight points clear of second-placed Bayern Munich, can clinch the title with a win over Borussia Monchengladbach in a match which has been scheduled for Saturday evening.

However, if Bayern fail to win at Werder Bremen in an afternoon game, Dortmund will have won the title before their match starts.

"Apparently, nobody at the Bundesliga had thought that we could already be champions," Klopp said. "If they had come to me, I would have said last Sunday that all games should kick off on Saturday afternoon."

Werder Bremen striker Claudio Pizarro, the highest-scoring foreign player in Bundesliga history, could return for a second stint at Bayern Munich at the end of the season, a report in the Muncher Merkur newspaper claimed.

The 33-year-old Peruvian would replace Bayern striker Ivica Olic who is set to leave the Bavarians, said the report.

Werder Bremen captain Clemens Fritz has signed a two-year contract extension which will keep him at the club until the end of the 2013/14 seasons, the club said.

"Clemens has been playing to a very high level for years," coach Thomas Schaaf said. "If his consistency can rub off on the rest of the team it'll be fantastic. His experience and personality make him a very important player for us."

"Obviously, third place means more income for us. I hope we can hear the Champions League anthem in our stadium next season," sporting director Max Eberl said. "Right now, I hear it every day, when my son is on the PlayStation."

Gladbach, who narrowly avoided relegation last season, are fourth, which would earn them a place in the Champions League final qualifying round. They are one point behind Schalke, who visit improving Augsburg on Sunday.