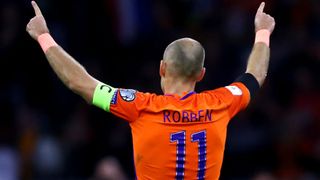 Arjen Robben retired from international football after Netherlands' failure to qualify for the World Cup was confirmed with Tuesday's 2-0 win over Sweden.

The Bayern Munich winger made his Oranje bow in 2003 and Tuesday's match saw him win his 96th cap with a fittingly brilliant performance.

Robben was the best player on the pitch against Sweden and led by example as captain, scoring twice to take his international tally to 37 goals and making himself a constant threat from the right flank.

However, Dick Advocaat's side had needed to score seven times, leaving the third-placed team at the previous World Cup absent from the party at Russia 2018.

Robben gives up his Netherlands duties after an immensely productive career on the international stage, scoring or assisting a goal every 112 minutes.

The 33-year-old represented his country at six major international tournaments and is among their all-time top scorers with his two-goal haul taking him into a tie for fourth with Dennis Bergkamp.

His haul of 96 caps also makes him their ninth most regular international, though that impressive figure remains one clipped by numerous injuries.