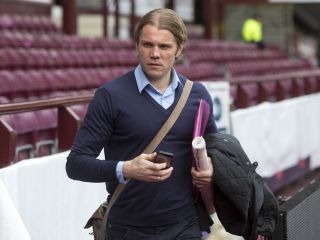 Robbie Neilson has vowed to use the anger over Hearts’ enforced relegation to fire up his new side next season.

Jambos owner Ann Budge is still fighting against demotion to the Scottish Championship and in the coming days the club will go before a Scottish Football Association arbitration panel in a last-ditch bid to reclaim their place in the top-flight.

But even if that process succeeds, Neilson admits it is unlikely to sooth the wounds of division which have grown since the Covid-19 crisis brought Scottish football to a shuddering halt.

The former defender has returned for a second stint as boss at Tynecastle and as things stand, his aim will be to win a second straight Championship title after triumphing last year with Dundee United.

And the 40-year-old insists his squad will not be short on incentive.

“We’ll use (the anger) as a motivation,” said Neilson, who helped Hearts bounce back the last time they dropped down to the second tier in the 2014/15 season.

“Definitely – I think everyone would. I think it’s important that we stick together as a group and we’ll do that as we did previously. It’s been a difficult few years for everyone but now it’s a fresh start and we can move forward.

“It’s about winning matches and I believe we have a squad here who can do that.

“There’s a disappointment about the way things have turned out. Is it an anger? That’s a bit of a strong word to say but there’s definitely a motivation to put it right.

“A few managers have spoken about if their club was put in the same situation, they’d expect them to do exactly what we’re doing, so I think it’s important we went down the route we did.

“We’re still going to keep pushing hard to get the result we want.”

United suffered three years of Championship heartache before Neilson finally led them back to the Premiership at the club’s fourth attempt.

But he is confident Hearts’ stay in the wilderness will not last so long.

Neilson said: “It was a very difficult four years for United. When teams come down it’s very important they get back up as quickly as possible and hopefully within the first season.

“I understand it will be like that too here at Hearts.

“We managed to do it the last time I was in charge and I managed to get Dundee United out of the league as well so I have that experience.”

Neilson has already made his first signing after luring Craig Gordon back to the club.

He is adamant Hearts need to cling onto youngster Aaron Hickey while he has not ruled out a move for Sam Nicholson after the former Jambos winger cut short his stay with MS outfit Colorado Rapids.

Neilson, who also confirmed former skipper Christophe Berra will be welcomed back into his squad after being sent to Dundee on loan by former head coach Daniel Stendel, said: “Aaron is going to be a huge asset to the football club and it’s important that no matter what division we’re in, we have to keep our best players and Aaron is definitely in that category.

“Sam is a really good player and also a really good friend of mine. He’s the level of player we’re hoping to attract to this football club but I’m sure he’ll have numerous offers back in the UK – but he’s one we’ll definitely be speaking to.”