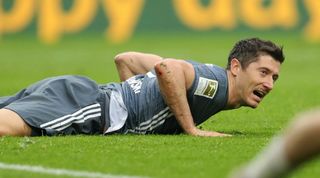 Lewandowski has received contract renewal offers from Bayern all season long, but is yet to put pen to paper on an extension.

It is beleieved that Bayern will make one final push to keep Lewandowski tied down, according to Kicker.

However, United are among a host of clubs waiting to pounce should the contractual impasse between player and club reach a stalemate.

Despite their failure to qualify for the Champions League, United are hoping their financial power and reputation can still lure Europe's top players to Old Trafford.

United's newfound transfer policy is widely reported to be centred around youth, but Lewandowski will be approaching 31 at the beginning of next season.

But with 38 goals this season, the Polish striker is still hitting form at the highest level.

United will reportedly face competition from PSG, who are also on high alert regarding Lewandowski's situation.

Quiz! Can you name the 30 most recent clubs to win the FA Cup?