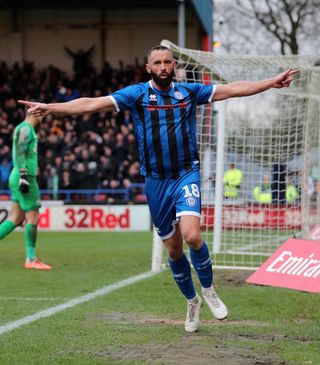 Rochdale’s 40-year-old headline-maker Aaron Wilbraham claims the pressure is all on Newcastle as the sides prepare to meet again in the FA Cup this week.

Wilbraham came off the bench to snatch a late equaliser against the Magpies and take their third-round tie to a replay at St James’ Park this Tuesday.

Rochdale are currently 18th in League One, 49 places below Premier League Newcastle on the football ladder, and Wilbraham feels they have nothing to lose.

Rochdale's Aaron Wilbraham, the 40yo headline-maker against Newcastle last time, says the pressure is all on the Magpies ahead of Tuesday's FA Cup 3rd rd replay @officiallydalepic.twitter.com/9OOlY4FsEi— Andy Hampson (@andyhampson) January 13, 2020

The former Norwich and Crystal Palace striker told the PA news agency: “We’re really looking forward to it. It’s going to be a great experience for the lads and the supporters and everyone going up who’s involved with Rochdale.

“I think we can go there with no fear after the way we played in the second half. The pressure is on Newcastle, their fans will be expecting them to beat us. We’ve got to go there and try to enjoy the underdog tag and hopefully get the right result.”

Rochdale earned plaudits when they held Manchester United to a 1-1 draw at Old Trafford in the Carabao Cup in September before losing on penalties.

Wilbraham said: “We are unbeaten against Premier League opposition! So we will take that.

“We’ve had a good start to the new year as well with two wins and a good draw against Newcastle. We go up there full of confidence.”

Wilbraham has represented 11 clubs in his career and played in the top flight with both Norwich and Palace. He joined Rochdale in 2018.

He proved he has still got plenty left in the tank with his equaliser against Newcastle at Spotland, having come on as a half-time substitute.

“It’s definitely a highlight,” he said. “When I first scored the goal I didn’t think it was a big deal but obviously it is – a 40-year-old scoring against Premier League opposition and being assisted by a 17-year-old.

“I could then see the story, why there was so much attention, but for me I just wanted to come on and do a job for the team and get the right result.

“I managed to do that with the equalising goal and now we’ve got the chance to go to St James’ Park and hopefully get through to the next round.

“I feel good. A lot has been made of me being 40 but you’ve just got to take that! I’m still training every day and enjoying myself. I’m just going to keep going as long as I can.”