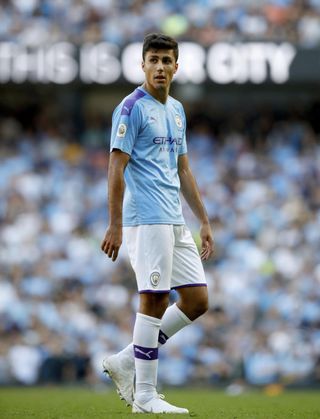 Manchester City midfielder Rodri is confident the champions can make up ground on Liverpool in the next month.

City, who are third in the Premier League, trail the leaders from Merseyside by nine points after 13 games.

They face a tough December with matches against Manchester United, Arsenal and Leicester, but Liverpool have a hectic schedule that includes the Club World Cup in Qatar.

Asked if the gap can be cut, Rodri said: “Of course. There are a lot of matches and let’s see what happens.

“We will go on every pitch and do our best and always want three points. Nine points from the leaders – if we want to fight for this Premier League we have to win all the games.

“Of course it’s so important to do your homework, you have to think about the next ones and the next matches are so important. They are finals for us.

“We have to be focused and there are a lot of players playing a lot of minutes, so we have to rest and, of course, get back all the injured players to get all the team.”

City travel to Newcastle this weekend and Burnley next Tuesday before hosting United in the Manchester derby on December 7.

That will be an intense period but the pressure will at least be off for their final Champions League Group C game against Dinamo Zagreb in Croatia on December 11.

City secured top spot in the group and a place in the last 16 for a seventh consecutive year as they played out a tame 1-1 draw with Shakhtar Donetsk at the Etihad Stadium on Tuesday.

After a pedestrian first half, Ilkay Gundogan opened the scoring in the 56th minute but Shakhtar responded to claim a deserved point through Manor Solomon.

We can definitely perform better! But the duty is done and we finish on top of the table 🎱⚽ #CmonCity@ManCitypic.twitter.com/NrBroh7RMD— Ilkay Gündogan (@IlkayGuendogan) November 26, 2019

He said: “We knew a draw was good for us. There are lots of matches in the year so we don’t have to be crazy.

“Of course at the beginning of the match we wanted to win but if we draw for first in the group it’s OK for the team.

“I don’t think they had too many chances. They scored one goal and we had a lot of chances.

“It seems like it always happens the same. We have to check and fix these problems but the team is growing and I think we did a good match.”