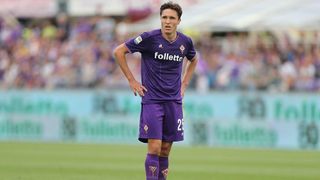 Federico Chiesa is likely to be staying at Fiorentina next season despite interest from Napoli and Roma because he is "very happy", according to his father Enrico.

The 20-year-old winger enjoyed something of a breakout season in 2017-18, playing 36 league games and scoring six goals.

Although he burst onto the scene in the previous campaign with 27 Serie A appearances, it was in this term that he found consistency and started to become a regular option for the senior Italy side, featuring three times for his country.

Other clubs have started to show interest in the Fiorentina youth product, with Roma and Napoli reported to be most keen, while Juventus, Inter and AC Milan are also said to be keeping an eye on him.

But Chiesa's father, who also played for La Viola and Italy, is not expecting him to depart just yet.

"Now he has to think about the National team, because it represents a great satisfaction for him," Enrico Chiesa told reporters.

"For the rest [transfer rumours], he has a contract and he is very happy. Now he focuses on the national team and then from Monday think about enjoying a month off, because he deserves it.

"It was a very hard season. He and his team-mates still have to overcome the [Davide] Astori drama [after his death in March]. The next few weeks will serve him to rest and then get ready again."