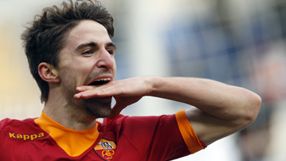 Roma formerly part-owned him with Serie A rivals Parma but an offer of 4.9 million euros in a sealed envelope bid proved enough to ensure that Borini would stay at the Stadio Olimpico.

There had been media speculation in Italy and England that the ex-Swansea City player could link up again with former coach Brendan Rodgers who is now in charge at Liverpool.

Borini, a member of the Italian squad at the European Championship, spent last season on loan at Roma.