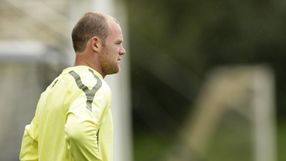 The 25-year-old England forward, who has struggled with an ankle injury, has not played since October 16 and has recently returned from a week of training in the United States.

"We need to assess that a little more closely. He could make the bench but I don't think he'll start."

Rooney could face a mixed reception when he does finally return to Old Trafford with some fans delighted he agreed to stay and sign a five-year deal and others still smarting from his criticism of the club and his initial desire to leave.

If he does not play on Saturday he could be ready for next week's Champions League match at Rangers where United could seal qualification to the knockout stages.

Ferguson said defenders Rio Ferdinand and Chris Smalling were being assessed after picking up groin strains on midweek England duty.

Winger Nani faces a late fitness test after only arriving back in Manchester on Friday from his exploits with Portugal while defender Rafael has a dead leg and is doubtful to face Wigan.

Ferguson added that midfielder Ryan Giggs would not be rushed back from his hamstring injury.