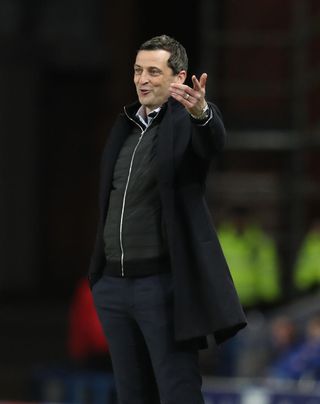 Hibernian’s historic William Hill Scottish Cup final win of 2016 may have ended a tortuous 114-year wait to lift the trophy but boss Jack Ross is keen to deliver again.

David Gray’s dramatic late header at Hampden Park saw Alan Stubbs’ Hibs side beat Rangers 3-2 to take the trophy back to Leith for the first time since 1902.

Ahead of the fifth-round tie against Lowland League side BSC Glasgow at Alloa’s Indodrill Stadium on Sunday, Ross was asked if that famous day had taken the pressure off the club.

“Probably for some people because what Alan and his squad did was to take away that hysteria and hype that went with every time the Scottish Cup started and the club progressed further in the tournament,” he said.

“For me, not really because I put myself under pressure to deliver success for the club.

“So just because the club won the Scottish Cup recently I don’t feel under any less pressure I put on myself, because I want to do well and be successful while I’m here.

“I will feel just as much pressure to win the cup this year as I would have done if Hibs hadn’t been successful a few years ago under Alan.”

Ross will trust his players to make sure there is no prospect of a cup shock, pointing to parts of the performance in the 2-1 Ladbrokes Premiership defeat by Rangers at Ibrox on Wednesday night.

The former St Mirren and Sunderland boss said: “There has got to be a trust in what the players do and are prepared to do and that is the key thing.

“Sometimes that is not an easy thing to do in football because of the emotion involved in the game.

“You can go out with the best-laid plans but emotion takes over and decision-making is affected.

“Wednesday night was a great one for us, a hugely different game but we had to have trust in what we wanted to do and we did that in parts of the game, particularly in the first half.

“Sunday is the same, we will prepare and know what we want to do and it is a case of trusting and if we do that we will be okay and not be caught up in anything that might happen in any part of the game.

“That is a mindset thing that grows as you get more confident in what I am asking them to do.”