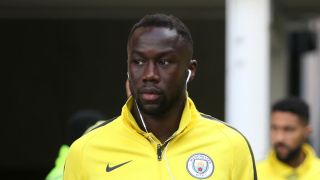 Bacary Sagna is leaving Manchester City after three seasons at the club, becoming the fourth first-team player released by Pep Guardiola's side on Thursday.

City announced Sagna is departing with his contract due to expire after they had confirmed the same outcomes for Gael Clichy, Jesus Navas and Willy Caballero.

The 34-year-old defender spent three years with the club after signing from Arsenal in 2014 and won the League Cup in 2016.

Sagna's role diminished under Guardiola and he only started 14 Premier League games this season after making 27 in 2015-16.

"It has been a privilege to play for this football club," said Sagna.

"I have enjoyed every moment of my City career and will look back on my time at City fondly.

"I would like to thank the staff, players and fans for making my three years so memorable."

The four players whose departures were made official on Thursday add to the exit of Pablo Zabaleta, which was confirmed two weeks ago.

Veteran midfielder Yaya Toure is still waiting to see whether he will be offered fresh terms.