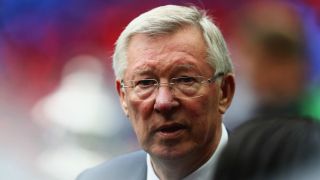 Louis Saha says "great man" Alex Ferguson was such a success as a football manager due to his interest in people.

Ferguson is recovering from emergency surgery after a brain haemorrhage earlier this month, leading to tributes pouring in for the former Manchester United manager.

Saha won two Premier League titles under Ferguson at United and was also part of the squad that won the Champions League in the 2007-08 season.

And the former France international gave his views on why Ferguson was able to establish such a dynasty at Old Trafford, the Scot winning 13 Premier League titles, five FA Cups and two Champions Leagues during his 26 years in charge.

"I have so many memories. He's such a great man," Saha told Omnisport. "At 6am in the morning the guy is already up to go shaking hands to all the employees. He knew their names and their stories.

"He was always there to lift me up when I was down due to consecutive injuries. He was there telling you the words you needed to hear. He made you understand that it was part of life and that there were worse situations. You were not on your way to [fight a war] in Afghanistan for example.

"Some things he said showed you how competitive he was but also that he has a deep understanding of life. He was not only here to bring you the values of a football player who has to kick a ball and score goals.

"We speak about a man who showed you that you need to have courage, be responsible, always pick yourself up at difficult times. We don't speak about football anymore. It's human. All of this was him.

"He had clear goals, he was a warrior. He took risks. He wanted to create something. He wanted everyone around him to burst with joy. That's everything that is important to this club. It is always going to be a progressive club that wants to win and make the fans incredibly happy."