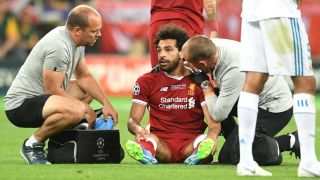 The Egyptian Football Association has moved to calm fears Mohamed Salah will miss the World Cup, claiming tests have shown the injury is not as bad as first suspected.

The Liverpool star went off in tears after half an hour of his side's 3-1 Champions League final defeat to Real Madrid, having hurt his shoulder when falling awkwardly under a challenge from Sergio Ramos on Saturday.

Liverpool manager Jurgen Klopp said the problem looked "really serious" and, although he was eager to wait for tests, he admitted Salah's prospects of going to Russia were in jeopardy.

However, Egypt's FA later tweeted to say the team doctor had spoken with Liverpool officials who confirmed an x-ray showed ligament damage in his shoulder, rather than a fracture.

It added there was "optimism" around Salah's prospects of being fit for the first of their Group A matches against Uruguay on June 15. Liverpool have yet to release a further update of their own on the player's condition.

Jurgen Klopp's went on to lose thanks to two goals from Gareth Bale, after Sadio Mane had cancelled out a second-half opener from Karim Benzema.