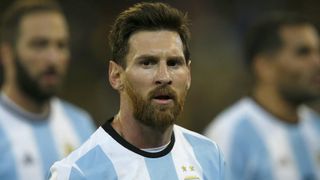 Sampaoli's men need a win in the World Cup qualifier in Quito on Tuesday as they look to salvage a place at Russia 2018.

Messi has scored four goals in nine qualifiers this campaign, but the last of those came in March, when Edgardo Bauza was still in charge.

However, Sampaoli praised the Barcelona star and said it was up to the 30-year-old's team-mates to reach his level.

"In these three games, I led an incredible Messi – committed, pressing," he told a news conference on Monday.

"If we are at Messi's level, the match will go very well."

Sampaoli said he still had some doubts over who would start, while he played down the significance of the altitude in Quito.

The 57-year-old said he would accept a result whichever way it came, with rain also forecast.

"On this occasion, I'm going to be happy if the team win even if they don't deserve it," Sampaoli said.

"I hope that qualification will be achieved because, beyond the numbers, Argentina deserve it."

Argentina (25 points) are sixth in the standings, but a win would see them rise above Colombia (26) or Peru (25), who meet in Lima.

A win would secure at least a play-off spot for Sampaoli's side, with Uruguay (28 points), Chile (26) and Paraguay (24) also looking to seal places.