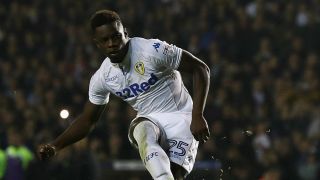 Sampdoria had some fun at Cristiano Ronaldo's expense to reveal the signing of Ronaldo Vieira from Leeds United.

The England Under-21 international has joined the Serie A side for a reported fee of €7million, after agreeing a five-year deal.

Samp borrowed Juventus' Ronaldo announcement as they confirmed the deal for the Guinea-Bissau-born 20-year-old on social media.

With the somewhat cheeky caption of "Sampdoria sign Ronaldo!", they tweeted a graphic done in the same style that Juve used when Ronaldo arrived from Real Madrid.

Vieira made 71 appearances for Leeds after coming through the club's youth system but was allowed to leave the Championship outfit by new boss Marcelo Bielsa.

The midfielder indicated the decision to depart Elland Road was a tough one as he said farewell to the fans with a Twitter post.

"Sometimes things are out of your control," Vieira said on Twitter. "But then you have to take those opportunities and give it your everything the same way as I have always done."