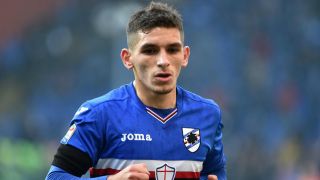 Serie A runners-up Napoli have been linked with a move for both midfielders, while Arsenal are said to have made enquiries following the appointment of Unai Emery as head coach.

Torreira in particular has been tipped to join a major European club in the transfer window if he impresses at the World Cup for Uruguay in the coming weeks.

However, Sampdoria have made it clear they will not accept anything less than the respective €25million and €26m buyout clauses for two of their star players.

"Torreira has a €25m release clause. Everyone knows that," Osti told Rai Sport. "Anyone who wants him will have to pay that.

"Praet is one of the most complete midfielders in Italy at the moment. He is a blend of quality and hard work.