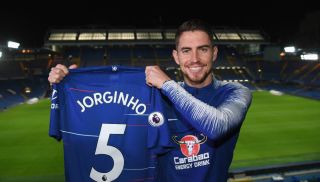 Jorginho says the mentality instilled in him by Maurizio Sarri has made him a better player.

The pair joined Chelsea together on Saturday following a productive three seasons at Napoli, with Sarri insisting on a £50million deal for the midfielder having replaced Antonio Conte.

And Italy international Jorginho was full of praise for Sarri following the pair's reunion at Stamford Bridge.

''When we were together at Napoli, it was a case of me taking on his mentality and putting that together with the characteristics I have as a footballer," he told Chelsea's official website.

''He is right on top of everything that is going on on the pitch. When the weekend comes around and you have a game, you start that game knowing how every situation is going to pan out.

''He is a very straightforward person, he is easy to communicate with, he is very approachable and that is something that also helps the players.''

Chelsea landed in Australia on Thursday ahead of their pre-season fixture with A-League side Perth Glory.

Jorginho is expected to feature for the Blues, although they are missing several players who starred at the World Cup including N'Golo Kante, Eden Hazard, and Thibaut Courtois - the latter pair having been linked with a move to Real Madrid.