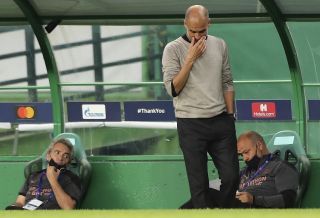 Manchester City’s hopes of winning a maiden Champions League title ended on Saturday after Lyon secured a 3-1 victory to reach the semi-finals in Lisbon.

Pep Guardiola has won the Premier League twice, the Carabao Cup on three occasions and the FA Cup once since he took over at the Etihad Stadium in 2016, but European success has eluded him during his time with City.

Here, the PA news agency takes a look at City’s knockout exits under the Spanish manager in recent seasons.

After finishing runners-up to Barcelona in their group, City were handed what looked a favourable knockout tie. The Citizens showed their fire power with a 5-3 win in the first leg at home, including a Sergio Aguero brace, but two goals from Radamel Falcao and another from Kylian Mbappe set up an intriguing second leg. It proved a disastrous night at Stade Louis II, with Tiemoue Bakayoko’s header 13 minutes from time enough to dump City out on away goals after it finished 6-6 on aggregate.

The boss was delighted with the determination and conviction of his players in tonight's win over @ManCity. 👌— Liverpool FC (Premier League Champions 🏆) (@LFC) April 10, 2018

Guardiola’s side had no answer to an electric Anfield atmosphere after Liverpool found the net three times in the opening 31 minutes of the first leg. After City’s team bus had been damaged on the way to the ground, it appeared the visitors were still in the changing room when Mo Salah, Alex Oxlade-Chamberlain and Sadio Mane struck in the first half. It stayed goalless in the second half and although Gabriel Jesus scored two minutes into the second leg, Liverpool clinched a 2-1 win at the Etihad to go through 5-1 on aggregate.

Fresh from a 7-0 win over Schalke, City were eager to make it third time lucky in the knockout phase under Guardiola but suffered a 1-0 loss at Tottenham in the first leg, with Sergio Aguero denied from the penalty spot early on. Premier League rivals Spurs would go on to progress on the away goal rule after it finished 4-4 on aggregate, but that only told a small part of the story. Raheem Sterling sent the Etihad wild with a strike in stoppage time, but the video assistant referee ruled out the goal and Fernando Llorente’s contentious effort proved the difference in a thrilling encounter.

FULL TIME | We bow out of the @ChampionsLeague— Manchester City (@ManCity) August 15, 2020

With the coronavirus pandemic forcing a revamp of this season’s competition, the one-legged last-eight clash was played in Lisbon behind closed doors. Like against Monaco, a Ligue 1 club stunned City and again by a 3-1 scoreline. A week earlier Guardiola’s men had seen off Real Madrid, but they were second best to Lyon and another crazy finale to proceedings was crucial. Kevin De Bruyne cancelled out Maxwel Cornet’s opener before ex-Celtic and Fulham striker Moussa Dembele put the French outfit ahead in the 79th minute. Sterling had the chance to level late on but missed an open goal, leaving Dembele to wrap up the win with his second despite a potential foul on Aymeric Laporte in the build-up.