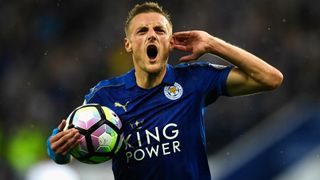 Leicester City striker Jamie Vardy would have become a party rep in Ibiza if it was not for Craig Shakespeare's intervention.

He has his own iconic chant but it could have been a lot different had Vardy walked away from football in 2013, having considered leaving the Foxes after arriving in the Championship from non-league outfit Fleetwood Town.

Vardy was out of form and out of love with the game, until then joint-assistant Shakespeare - now manager - stepped in and convinced the 30-year-old England international that he was destined for the top.

"Our job is to support players. Sometimes they do have self-doubt and Jamie would be the first to admit he was going through a rough patch," Shakespeare said of Vardy, who has gone on to win the Premier League title and earn 16 England caps.

"Myself, Nigel [Pearson] and Steve [Walsh] were here to support him. All we did was told him about his attributes and that we thought he could go on.

"We even mentioned then about not only playing in the Premier League but also he had the attributes to play for the national team. We told him we wanted him and believed in him.

"Thankfully he didn't go to Ibiza. I think he has made the right decision!"