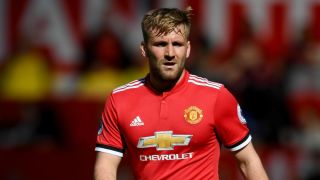 Manchester United left-back Luke Shaw wants to be the first name on the teamsheet as he looks to win over manager Jose Mourinho.

Shaw has found it "annoying" to have to prove himself at Old Trafford, where he has struggled to earn the trust of Mourinho since the Portuguese boss replaced Louis van Gaal in 2016.

The 23-year-old only started eight Premier League matches last season, while Shaw was publicly criticised by Mourinho during the 2017-18 campaign with Ashley Young preferred in the left-back role.

In the United States for the club's pre-season tour, Shaw is determined to turn around his fortunes in Manchester.

"The next five games are all about fitness, but I want to try and prove to the manager that I can be in his team, not just in these games," Shaw told reporters ahead of Thursday's friendly against Mexican giants America.

"When everyone comes back and everyone is fit and ready, I still want to be that first name on the teamsheet.

"It's time for me to show him over the next four weeks what I can do and why I deserve to be in this team."

ICYMI - Catch up on what Jose Mourinho and told the media in their press conferences earlier today... July 18, 2018

Shaw added: "It's annoying for me to say I need to prove myself. But I know what I can do and that's why I'm still here. I'm sure that's what the manager thinks.

"I don't think I would still be involved right now if the manager didn't believe in me. I've had a good chat with him and I look forward to the new season and getting back to my best."