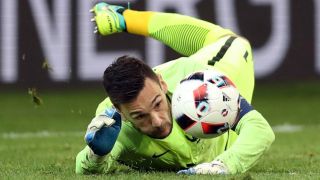 Former England goalkeeper Peter Shilton has singled out Hugo Lloris as the best shot-stopper at Euro 2016 after his heroics helped his side progress to the final, making a string of saves in the semi-final against Germany.

France won 2-0 as Lloris was called on to make some brilliant saves, meaning they will meet Portugal in the final in Paris on Sunday.

And Shilton said the performance - alongside that of Antoine Griezmann who scored the two goals - was a huge part of France's success.

"The other French player who has had a significant impact is goalie and captain Hugo Lloris," Shilton wrote in his Times of India column.

"I would say he is the goalkeeper of the tournament, and his excellent saves against Germany kept France in the game on Thursday."

But while Lloris has been key, Shilton was keen to heap praise on Griezmann, saying the leading goalscorer had outperformed the likes of Thomas Muller.

"I firmly believe he is one of the reasons France are in the final. He is what we call a poacher, an opportunistic goal scorer, and his classic big guy-little guy combination with [Olivier] Giroud works very well," he wrote.

"In fact, Germany needed a Griezmann, because Thomas Muller, one of my favourite current players, just didn't look sharp enough in the box."

Griezmann might be leading France's charge and the race for the golden boot, but Shilton opted for Cristiano Ronaldo as striker of the tournament as he anticipated an open final between the two nations.

"Portugal are a completely different story, however. For one thing, their stubborn, largely defensive style of football may not be entertaining, but it is designed to frustrate the opposition into making mistakes. And they have Cristiano Ronaldo," he wrote.

"For me, Ronaldo has been the striker of the tournament. Renato Sanches has been very good, too, of course.

"I reckon the final will be a more open game, though both teams will be cautious to begin with. As the match goes on, both are likely to attack, and I'm very interested to see how Olivier Giroud and Antoine Griezmann combine.

"If you hold a gun to my head, I would say 2-1 to France, keeping in mind the fact that Ronaldo needs only a couple of chances to turn a game around."