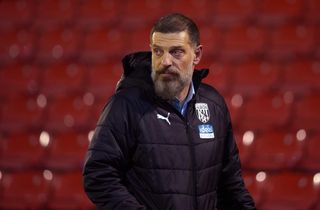 West Brom manager Slaven Bilic felt his side were more than worthy winners after beating Charlton 1-0 in the FA Cup third round at the Valley.

Bilic’s decision to make 11 changes from the side which started against Leeds in midweek paid off as Kenneth Zohore’s strike in the 32nd minute settled the tie.

The Baggies boss said: “It was a good win of course. It is great to go through in the cup.

“It doesn’t matter that you are going to have more games and the league game against Cardiff is going to have to be rescheduled. Make no mistake, it is always good.

“Good to do a bit of both. To rest your players who are tired and to go through, and to give the players who didn’t start a game some time/

“To give them 90 minutes is important for their quality, for us to see them, for their confidence, for everything because we are going to need them.

“I think the performance was good. It wasn’t easy because we didn’t score more goals and there is always a chance for the opponent to score, and they had a chance at the end when they hit the bar.

“But apart from that from the beginning to the end we were much better. We were dominant.

“We should have, and could have, scored more goals.”

Bowyer said: “I thought they did well. My team gave everything they had.

“Yes, at times we lacked a bit of quality, especially in the first half in the final third we rushed it and panicked a bit.

“But overall I think in the first half we restricted them and we didn’t have much going forward ourselves.

“That is why I changed it and then in the second half I thought we were in the game.

“We were in it. To have that many young players out there, they did themselves proud. They didn’t let me down.

“We’ve just lost 1-0 against a very good West Brom side. We’ve got a 16-year-old kid out there who has just played against people who I was playing against.

“Gareth Barry has been around forever and has so much experience.

“For Aaron Henry to play against him and Chris Brunt and Charlie Austin, other ones who I have played against, to be playing against them will only do those lads good for the future.”