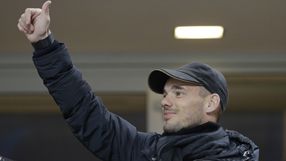 Hundreds of Galatasaray fans cheered, let off flares and burst through a line of riot police to get close to Sneijder after live television footage showed him emerging from a private jet at Istanbul's Ataturk Airport.

Several fans clambered on top of the car carrying Sneijder to embrace him as he appeared through the sun roof to wave at the crowd, wearing a number 14 Galatasaray shirt.

Reports said the likes of Premier League side Liverpool were also interested in the 28-year-old, who inspired Inter Milan to a Champions League, Serie A and Italian Cup treble in 2010 before helping the Netherlands finish second in the World Cup.

Playmaker Sneijder has struggled to maintain those heights and has been caught up in a contract dispute at Inter this season after failing to renegotiate his deal at the newly frugal club's behest, meaning he was banished from the team.

Nevertheless the signing of Sneijder for a so far undisclosed package is a major coup for the Turkish league, which is more used to taking top players towards the end of their careers such as Fenerbahce's Dutchman Dirk Kuyt.

Turkish leaders Galatasaray, who unlike Europa League contenders Inter are in the Champions League last 16, confirmed a deal was done after Sneijder first announced the move on Sunday following days of pondering their offer.

"An agreement has been reached," Galatasaray said in a statement on their website. "When the agreement is signed, after the player's medical, the details will be announced."

He hopes to make his debut for the Super League champions in the derby with Besiktas on January 27.

"It will be amazing and the atmosphere will be nice, I can't wait to go there and play my first game," Sneijder said.

A move to one of Europe's top five leagues seemed certain when Inter made it clear late last year that former Manchester United target Sneijder could leave in the January transfer window having only played three Serie A games this term.